So… the thing that has most held us up is getting the gas capped, at the street, by PG&E. When I applied for service changes in February, they took my application for electric but not gas. So, when I called in May to have the electric swung to the temporary pole and ask for gas disconnection, we needed to start ALL THE WAY at the beginning with another application for gas changes. That then put us the actual date out to the cutoff until July 7. Uggh.

Finally July 7 arrived… yeah! I had emailed my contact on the 3rd to confirm but never heard back from him. But, given it was the long weekend I figured what the hey. I truck over to the house at 8AM on Monday the 7th… No sign of PG&E. At 9:30, I started to call and email with a vengeance. I called my contact, emailed him, called him again, called his boss…NOTHING. It was not until 11:30 that I heard back from his boss. He knew nothing but said he would check and let me know. An hour later I get a call from another guy. Start the spiel all over again. He knows nothing but will check. Said would call right back. Nope… guess again. After 45 mins I call him. No answer. 15 mins later he calls to tell me, bad news. Not going to happen. Seems there is some sort of emergency and they can't make it out. Mind you, this is now over 5 hours sitting waiting in the garage, on a lawn chair, with my batteries slowly dying on my phone and iPad.

I blow a gasket, mostly because does no one ever call to say that plans change??? Also, the week was planned so that on Monday gas capped; Tuesday, sewer capped; Wednesday, sewer cap inspected, Thursday, march to city to finalize our application for the demolition permit. The delay with PG&E was now going to set me back… it was just a matter of how much. And I was pissed about that too.

By 2PM I am back on with his boss who tells me in reality the reason that my work was not done is that many people called in sick. (The 4 day weekend was not enough for them, I guess). I was assured that I would have the work done first thing in the AM and I would get a confirmation phone call.

I am DEATHLY afraid of gas… natural gas lines and propane tanks. Regular gasoline and butane, not a big deal. I think it is the magnitude of the boom and fire of the first two. As the crew was jackhammering the street to get to the pipe so they could cap it, I got the heck out of dodge. Pronto.

I checked on them from the car, down the block, about 1/2 hr later. And, they were working… I even got a picture!

And they were done by about noon from what I hear. But, as I feared, the schedule is set back a week. I had to cancel the sewer being capped on Tuesday and lost my spot. They are trying to get it done sometime later in the week. It does not really matter because West Bay Sanitation only inspects Tuesday-Thursday so we will miss that.

Hoping next week is better and we can get the demo permit all signed off and begin!

In case you could not figure it out, I HATE PG&E more than National Construction Rentals. I did not think anyone would take that crown but someone did in less than a month! 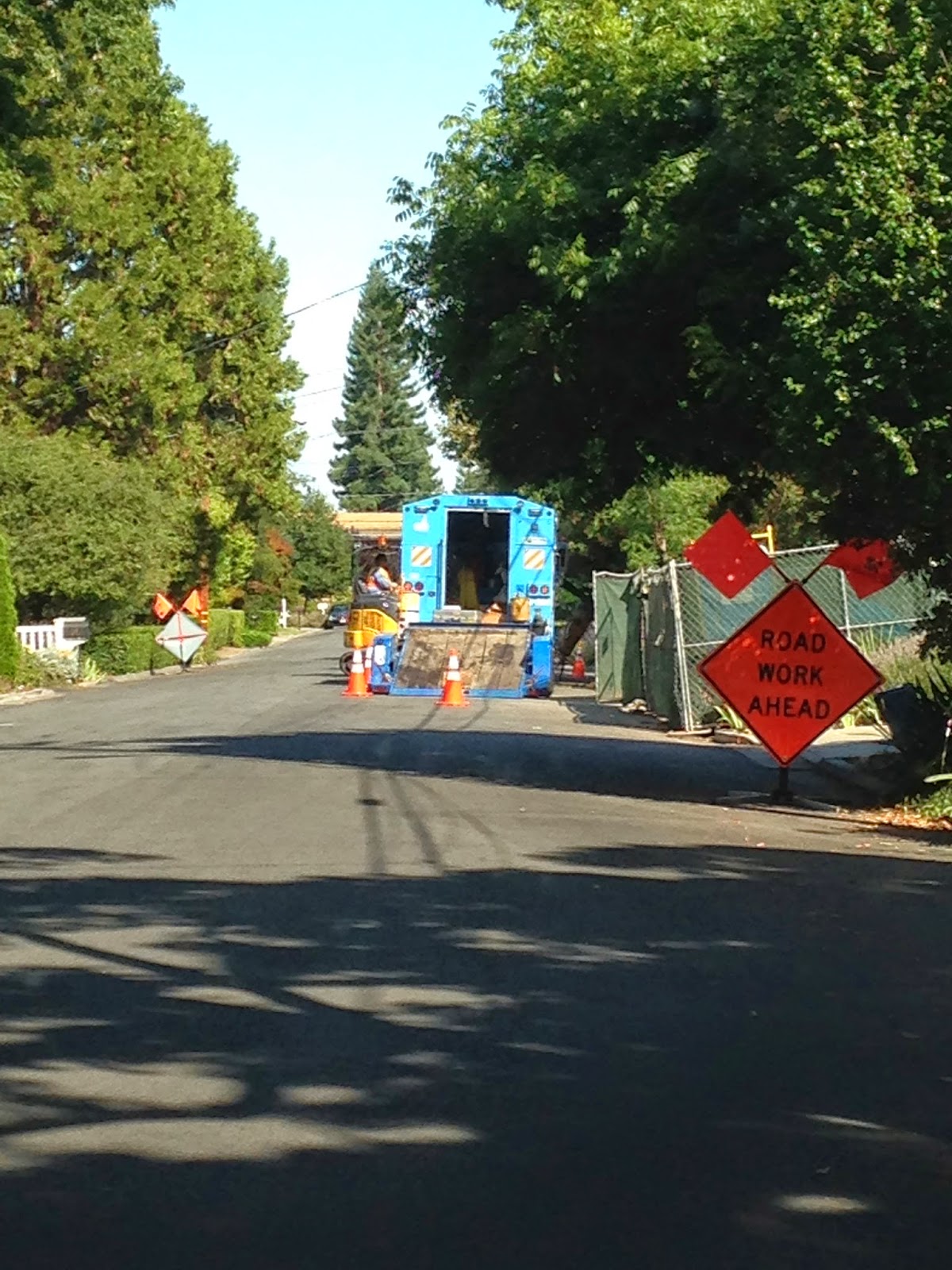 Posted by hamiltonjf at 4:31 PM